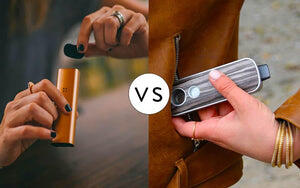 Editor's Note: This article was originally published in April 2020 and has been updated for accuracy, freshness and comprehensiveness.

The PAX 3 and Firefly 2+ are two of the most popular portable vaporizers on the market today, and it’s not hard to see why—literally. These slim, lightweight devices are both top contenders for the ‘Which vaporizer gives off the strongest iPhone vibes’ award, and they back up their good looks with high level performance.

Jokes aside, both of these devices have won numerous real awards thanks to their premium design and superior vapour quality.

Both of them are dual use vaporizers—meaning they’re equally well suited to meeting the needs of dry herb lovers and concentrate aficionados—and both come with warranties that are among the best in the vape world.

In fact, the PAX 3 and Firefly 2+ are so evenly matched that it’s hard to say, at first glance, which one of these vapes is ‘better’ (always a highly subjective question in any case, but bear with us).

However, by digging into both the quantitative and qualitative criteria, we can get a reasonable idea of which vape offers a more attractive bargain.

PAX 3 vs. Firefly 2+: A Quick Comparison

Here’s a brief rundown of all the key stats you should know about each of these vapes: The PAX 3 is a vape that delights both the eyes and the hands—the sleek, polished metal body gives a feeling of solidity and power whilst still fitting comfortably in your palm.

And PAX have recently announced that the device is available in a wide range of new colours (including sand, sage, and burgundy), which is always a welcome touch for the aesthetically inclined. The Firefly 2+ might be one of the only portable vaporizers that can compete with the PAX 3 when it comes to the eye test.

Like its competitor, the body of the Firefly 2+ is fashioned from handsome metal, and it’s also available in multiple colours.

It’s slightly heavier than the PAX 3, but to be honest the total weights of the two devices are so low that most people won’t notice much of a difference.

In terms of design, it’s hard to go wrong with either vaporizer. The biggest deciding factor would probably be the colour (even in this regard, there’s quite a bit of overlap). They’re both well-made and stylish, though, so it’s really a tossup.

The designers of the PAX 3 took a minimalist approach when building this vape, which results in a device that’s intuitive and user friendly.

Loading the device is as simple as popping off the magnetic chamber lid at the bottom and adding your dry herb or concentrate (for the latter, make sure to use the special insert included in the kit to prevent a mess).

A single button near the mouthpiece controls functions like power, temperature control, and taking hits. You can also use the smartphone app to tweak your session settings even more precisely.

Loading the Firefly 2+ is slightly more of a process—you have to remove the lid from the top of the device to reveal the oven chamber, which then allows you to load your material (again, remember to use the concentrate pods if you don’t want to spend a long time scrubbing out the chamber).

Instead of one button controls like the PAX 3, the Firefly 2+ features two touch sensors near the bottom of the device, which can be used in much the same way.

Once again, it’s tough to pick a winner between the two. However, since the PAX 3 is a little easier to load (and there’s something reassuring about a physical button), it gets the nod in our opinion.

The PAX 3 has a fairly impressive range of temperatures: 182° C – 215° C, which lets you unlock a variety of ‘sensations’ from your vape material (pro tip: choose higher temps for more intensity).

While you can exert rudimentary control over the temperature using the controls on the device itself, downloading the PAX Mobile App will allow you to choose between ‘Dynamic Modes’ like Boost or Stealth.

The Firefly 2+ also comes with a smartphone app, but the temperature range you can choose on it is considerably wider than that of the PAX 3: 140° - 220° C.

This can be a welcome touch if you’re looking for especially potent (or mellow) effects from your session.

The Firefly 2+ also features a ‘dynamic heating system’ that gradually raises the temperature of your material as you inhale, which unlocks a fuller flavour profile.

Whilst it’s nice that both devices come with smartphone apps, there’s not a whole lot of differentiation in this regard.

In our opinion, the superior temperature range and versatile heating system of the Firefly 2+ outweighs the PAX 3’s Dynamic Modes.

The PAX 3 is known for producing surprisingly robust clouds of vapour for such a small device.

It uses a conduction heating system—in which the material is heated by direct physical contact with the oven chamber—but it also has an isolated air path, which helps keep your vapour from acquiring that unpleasant metallic taste.

Plus, the Stealth mode can be a godsend when you’re vaping in public and want to keep a low profile.

The Firefly 2+ has also gained legions of loyal fans who appreciate its thick, satisfying clouds of vapour. Unlike the PAX 3, it uses a convection heating system (in which superheated air is used to vaporize your material), which gives the Firefly 2+’s vapour a ‘cleaner’ taste to some people.

Also, the dynamic heating modes mean that your material’s terpenes—the molecules that give the material its smell and taste—are released gradually, resulting in a more developed flavour.

At the risk of sounding like a broken record, it’s hard to choose between the two! But once again, the Firefly 2+ gets the thumbs up from us, thanks to its contactless convection heating method and the prospect of preserving more tasty terpenes.

The PAX 3 could easily (and aptly) be described as the lazy person’s vape.

Cleaning takes just a few moments: pop off the bottom lid, scrape out any excess material, and give it a quick wipe with a cotton swab and some isopropyl alcohol.

You’ll also want to wipe down the mouthpiece with the aforementioned cotton swab/alcohol mixture, or just some warm water and a paper towel, Do this after every six sessions or so and your PAX 3 will stay in tip top shape.

The Firefly 2+ is also a breeze to clean and maintain, though there’s a little more work to get to the oven chamber.

Once you pop off the lid, the process is pretty much the same: pick out any residue, then give the oven chamber a quick rub down with some isopropyl alcohol and a cotton swab.

A moderate user can clean the Firefly 2+ once a week and be in good shape, though if you’re a more frequent vaper you’ll probably want to do this every few days.

Both devices are decidedly low maintenance, and cleaning doesn’t take much more than a minute in either case. However, since the PAX 3 makes it a bit easier to get at the bits that need tidying, it wins the prize here.

Final Verdict: Which Is Better, PAX 3 or Firefly 2+?

No matter which device you pick, you’re getting a stylish and pocket-friendly portable vape that lets you customise your sessions to a remarkable degree.

Both the PAX 3 and the Firefly 2+ are durable as well, thanks to those shiny metal bodies, and they both feature a nice mix of high end features (regardless of the occasional hiccups with the apps) and simple, user-friendly interfaces.

They have their downsides as well, of course. As mentioned before, sometimes you just don’t feel like fiddling with an app.

And whilst sometimes the discreteness of the LED notification lights suits your purposes perfectly, in other cases you might prefer having an old fashioned display screen on the device so you can check the temperature or battery life at a moment’s notice.

In the end, though, these are two of the best portable vaporizers money can buy—and the PAX 3 costs considerably less money.

Throw in the mammoth 10 year manufacturer’s warranty, and you’re getting quite a lot of bang for your metaphorical (or literal) buck. The PAX 3 gets our pick here, but if you beg to differ, we certainly won’t argue.