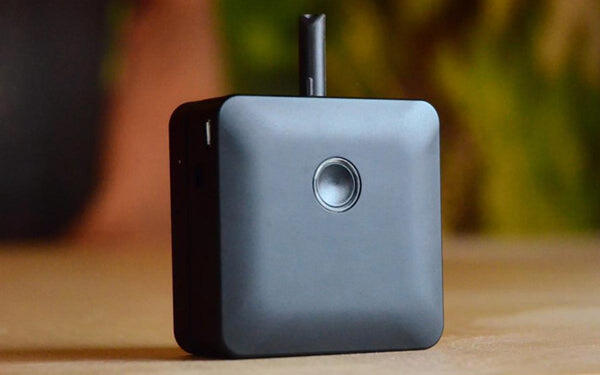 UPDATE: As of 12/31/18 Haze Technologies is no longer in business, the Square Pro and Haze Dual is no longer being produced. Check out our current top picks for best portable vaporizers.

Released in 2016 by Haze Technologies, the Haze Square Pro is a dry-herb vaporizer, standing 3” inches and weighing 25 grams, or just under two ounces. Coming as a follow up to its V3 model, it’s no surprise that this product vastly upgraded from its last. Its overall design is modeled to be a small black box. It has 4 full-convection ceramic ovens that allow for use of dry-herbs, essential oils, concentrates, and other extracts currently on the market for use, coming as an upgrade from the prior 2 that it had possessed.

These ovens are capable of holding up to one gram worth of dry-herbs, which is much higher than a normal vaporizer. To switch the ovens, users can rotate the product itself and move out the particular ones that they want. With a ceramic mouthpiece that can be pushed and store inside of the box, users are able to deliver a steady, tasty hit.

The Haze Square Pro’s battery is charged by USB-C, which differs from other vaporizers that use micro-usb cords to charge the battery. The whole device itself is capable of charging in under 30 minutes. It comes with four different material pods, for a specific use on each individual one. These pods can exchanged in and out, and most especially easily cleaned with the use of rubbing alcohols. It is priced reasonably, making it accessible for anyone who adheres to vaping as a hobby. For its price, it does offer a variety of different features making it a very versatile product.

Anyone who buys the Haze Square Pro must buy their own cleaning kit with the product, as it is not included otherwise. Along with this, it does not include a warranty. Coming in either the Pro, or Regular version, the Haze Square Pro is an easy buy for any vape enthusiast.

It includes app control compatible with most users smartphones. This adds an increased level of customization that is becoming more popular with a variety of manufacturers recently.

With the Haze Square Pro’s 4 convection ovens, an immediate noticeable different in taste can be noted and tasted in the mouth of any smoker.

Since the chambers are made of a stainless steel, users get a smoother, cleaner texture to their vapour. Coupled with the ceramic mouthpiece, the combination produces a distinct, yet awesome flavour.

With its 4 chambers, users are able to load different flavours and pack in different taste combinations. Something which is not so much the case in other vapes where you’d need to carry those individual oils with you. Instead, it is possible to load up those chambers ready for use later. Its overall look is very similar to a small standing black box, which is different from other vaporizers which often resemble pens or larger devices. Its small size makes it difficult to fit into most user’s pockets, but otherwise promotes its overall use as a portable device. Its mouthpiece, which is moved directly inside of the box, does not protrude out awkwardly as in other devices.

With its case made of aluminium and its mouthpiece made of ceramic, you can be sure that the taste of the material the vape is made of won’t get directly in the way of the flavour of your essential oils or concentrates.

Utilizing airtight silicone that is safe for the human body, it locks off a seal that traps in flavour and pushes it through the air-flow into your hit (however it can require a bit of practice and experimentation to get the result you desire).

It appears to be a larger wallet in most individual’s pockets, and for those with smaller pockets, it might prove too difficult to fit. But it’s by no means the biggest vaporizer out there.

Its battery is impressive, with most users report being able to experience 37 full draws before they need to recharge. Along with this, the battery itself can be fully charged in under forty minutes.

Users are able to use a USB-C Cord into any wall-adapter, and easily charge their devices. This cord is considered an upgrade from other vaporizer devices that typically use Micro-USB, allowing for an overall faster charge.

Since its 4 chambers hold 1 gram worth of dry herbs overall, you can fit a .25 worth of a gram in each. Typically, an experienced user can go through five chambers per charge.

Overall, the hitting potential of the Haze Square Pro is very great. It provides a lasting quality vapour that is capable of pleasing any seasoned vape smoker. It’s great taste and vapour makes it worth its price.

It is not a very complicated vape, easily pulled out and then material loaded into one of the four chambers.

Due to the consistency and quality of the material it’s made of, generally, there’s no need to worry about the vape breaking if it is dropped. It’s rather comfortable to use it as a portable vaporizer device. Its highly-versatile charger also helps users charge it on the go, or pretty much anywhere.

Check out the full introduction video from Haze Technologies:

In the end, utilizing all of these features prior listed, the Haze Square Pro is a great vaporizer for its price, and has many great features that makes it a special product. This trusted information is sourced from the manufacturer.