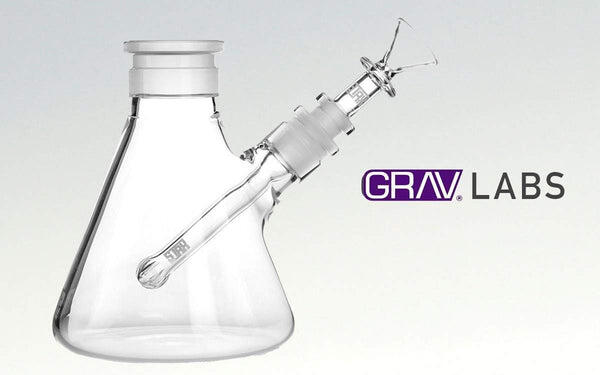 Grav Labs unquestionably makes some of the world’s best glass pipes, bongs and bubblers. Grav Labs pipes range from the simple to the extravagant, and the prices of those pipes are not low.

Considering the huge selection of pipes – and their wide-ranging shapes – it’s natural that you might feel a bit overwhelmed. In this guide, we’re going to provide some information that can help. We’re going to explain:

When you’re done reading, you’ll be an expert on Grav Labs pipes and will have a much better idea of what you want and why. Let’s get started!

What Are the Types of Grav Labs Pipes?

A hand pipe is the simplest of all glass pipes. The simplest type of hand pipe features nothing but a bowl at one end and a hole for inhalation at the other end. To use a pipe, simply grind your herb coarsely or break it up by hand.

Pack the pipe bowl, light the herb and enjoy. You’ll have less trouble keeping the herb lit if you pack the top of the pipe bowl a bit more firmly.

A glass hand pipe is the fastest way to enjoy smoking dry herbs. You can go from having your pipe and herbs in your pocket to smoking those herbs in seconds. Packing and lighting a pipe is much faster and more convenient than rolling a joint.

It’s easy to clean a small pipe by soaking it in alcohol. Since glass hand pipes are inexpensive, it isn’t a tragedy if you accidentally drop one and break it. The smallest hand pipes fit easily in a pocket and are very discreet.

Since a hand pipe traditionally has no filter, it allows you to fully extract the beneficial substances from your herbs.

The lack of a filter, though, is also a drawback because you may find it difficult to inhale deeply without coughing. Occasionally, you may even inhale bits of ash and resin with a hand pipe.

Who Should Buy a Grav Labs Hand Pipe?

You should buy a Grav Labs hand pipe if you want a smoking accessory that allows you to enjoy your herbs with no fuss and little maintenance. Aside from having someone else roll joints for you, there is no easier way to smoke than with a hand pipe.

A bong is a pipe that uses water to cool and filter the smoke. The bowl of a bong is similar to that of a hand pipe, but it connects to a longer tube that’s filled with water.

When you inhale, the smoke travels from the bowl to the main tube of the bong. Water-soluble components of the smoke – such as ash, tar and resin – remain in the water. The resulting smoke is cooler and smoother, allowing you to inhale more deeply without irritation.

A bong makes the smoking experience more pleasant by reducing the heat of the smoke and filtering out particles that would otherwise irritate your lungs and throat. A bong can reduce or eliminate coughing. As mentioned above, it can also allow you to take bigger hits when smoking.

A bong usually has universal connections that allow you to customize aspects of your smoking experience. Some of the accessories that Grav Labs makes for its bongs include replacement downstems, glycerin chillers, replacement bowls and ash catchers.

It’s even possible to add an ice catcher to your bong, giving you the ability to place ice cubes in the stem of your bong to further cool the smoke without affecting the ability of the water to filter the smoke.

Although a bong removes some of the tar from your smoke, studies suggest that the water may also filter out some of the beneficial compounds.

The effect on the smoking experience is negligible because, as we mentioned above, most people find that bongs allow them to take bigger, deeper hits. Compared to a hand pipe, though, you may find that you go through your material more quickly when using a bong.

The final drawback of water pipes is that they can be very expensive. Although borosilicate glass is very durable, you don’t want to drop it on a hard floor. Breaking a $400 bong is a heartbreaking experience.

Who Should Buy a Grav Labs Water Pipe?

A bubbler is a small water pipe that functions as a compromise between a hand pipe and a full-sized bong. Like hand pipes, bubblers are small, portable and easy to use – and like bongs, bubblers offer some water filtration to give you a smoother smoking experience.

A bubbler is almost as small as a hand pipe and nearly as quick and convenient to use. Unlike a hand pipe, though, a bubbler forces the smoke to pass through a layer of water before it reaches your mouth. The design of a bubbler allows it to give you many of the benefits of both pipes and bongs.

Although many bubblers are nearly as small as hand pipes, they’re also more complex and expensive. The most elaborate bubblers cost just as much as bongs, but they don’t have the same benefits.

Since most bubblers don’t have removable and interchangeable parts like bongs, they’re harder to clean and don’t offer the same level of customization. Since bubblers are also small, they hold less water than bongs.

Although a bubbler offers a smoking experience that’s noticeably smoother than what you’d get with a pipe, it doesn’t hold nearly as much water – and therefore doesn’t filter the smoke as well – as a bong.

Who Should Buy a Grav Labs Bubbler?

You should buy a Grav Labs bubbler if you‘ve tried a pipe and found the smoke too harsh to inhale – but don’t want to pay the high cost or go through the headaches of owning a bong.

While a bubbler isn’t as customizable as a bong – and it doesn’t offer the same level of filtration – you will find that a bubbler produces a much smoother smoking experience compared to a hand pipe.

Why Are Grav Labs Pipes So Expensive?

Grav Labs pipes are complex pieces of glassblowing art. They’re manufactured according to strict standards, and they can outlive you if you care properly for them. A Grav Labs pipe may have many small parts – often hand blown – that must fit together perfectly without gaps.

A poor fit can cause leaking or airflow problems, typically rendering the entire pipe defective. The complexity of the work necessitates a higher selling price. Grav Labs does offer several hand pipes, however, that are quite affordable.

What Is Borosilicate Glass?

Borosilicate glass is made from boron trioxide and silica. Unlike more traditional forms of glass – which might shatter when exposed to flame – borosilicate glass resists warping and maintains its structural integrity when it’s heated.

How Do I Care for My Grav Labs Pipe?

If you have a Grav Labs water pipe, the most important thing that you can do to care for it is change the water regularly. Regular water changes allow you to taste the full range of flavours in your material.

More importantly, changing the water prevents your pipe from harboring mold – which can be notoriously difficult to remove. We recommend filling your water pipe with filtered or distilled water.

Tap water may contain chlorine and minerals that will alter the taste of your material and leave deposits on the inside of your pipe. If you need to move a bong, hold it by the base rather than the delicate stems. Carry the bong carefully with two hands to avoid dropping it.

How Do I Clean My Grav Labs Pipe?

If you want your Grav Labs pipe to outlive you, you need to keep it clean. If you have a hand pipe or small bubbler, cleaning your pipe is easy; just fill a large bowl with rubbing alcohol.

Add some salt and allow your pipe to soak in the bowl for several hours. Since herb residue is alcohol soluble, the alcohol dissolves the resins. After removing your pipe from the bowl, rinse away any remaining residue with water.

If your pipe or bubbler has some hard-to-reach spaces, you can clean them with a soft pipe cleaner dipped in alcohol. Give your pipe a final rinse with filtered or distilled water before using it again.

If you have a larger bong from Grav Labs, cleaning it isn’t quite so easy. We recommend cleaning removable parts such the bowl using the alcohol soak method described above.

If residue remains in the bong, repeat the cleaning cycle. Rinse the bong a final time with filtered or distilled water before using it again.

This trusted information is sourced from the manufacturer and our own experience using the product.