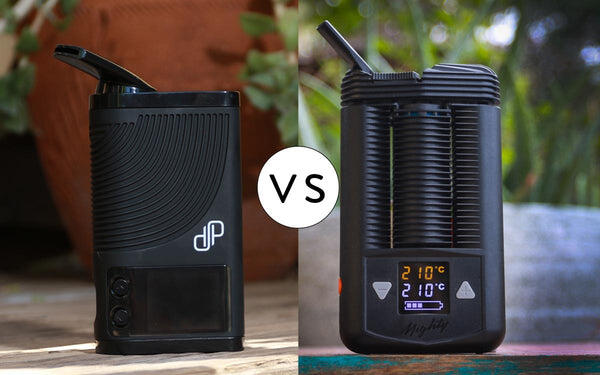 Today we are going to review and compare the Boundless CFX vs the Mighty vaporizer. both are dry herb vaporizers with the capacity for concentrates that have been on the market for several years, and have been wowing users for just as long.

They are popular for their own reasons, and come at very different price points, so it’s important to know which one is best for you, and how they compare to each other!

We will review their vapour quality, portability, discreetness, material quality, ease of use and other factors that consumers want to know about before investing in a vaporizer.

Both of these products are designed for dry material, but can also be used with concentrates with additional parts. They are among the most popular, portable vaporizers in the market. Both units produce rich, thick vapour and have smooth draws. The Mighty does a better job of cooling the vapour though, and its chamber is capable of holding about 0.25 grams of dried material. This model consistently obtains very high ratings and reviews from users. The CFX has a larger chamber holding up to 0.7 grams of dried material. Both can handle micro dosing of as little as 0.1 grams.

Both of these units are portable, though the Mighty’s charger makes it slightly less portable than its competitor (though there is a car charger available for an additional price). Neither of these is going to fit easily and discreetly into a pocket. They are about the size of some smaller cordless telephone handsets. However, they will fit into a purse or backpack for portability.

Because of their size, neither of these units is very discreet. However, both can easily be put in a jacket pocket, backpack or handbag. Both of these vaporizers weigh about the same at roughly half a pound and are fairly large. Both are made of plastic but the Boundless CFX is also covered with rubber to make it cooler to handle while the Mighty vaporizer is more sturdily built. The latter is the big brother to the Crafty, by the same manufacturer. Both have a display feature and the display on the CFX is more readable and shows more information.

The German made Mighty has a larger battery with a 90-minute battery life per charge and it can only be charged with its special charger. It takes about 2 hours to charge fully and you can use pass through charging to use it while it is plugged in. Also, if the battery is completely discharged, you can continue to use the unit on AC power.

It has a long, 6-foot power cord, which makes using it in this way much easier than one might have thought. The CFX offers a 45-minute battery life per charge though with the smaller battery. The Boundless CFX uses a micro-USB to charge or its own charger, with a similar 2 hour charging time on the cable or 30 minutes on the charger. The rapid charging feature is part of what makes this unit very popular.

Both of these units are extremely easy to use, with digital displays for the temperature and temperature adjustment buttons near the screen. Loading is fairly straightforward in both units as well.

The CFX has haptic feedback along with a 300 second session timer. It automatically goes into standby mode after a session until the user reactivates it.

Other Things to Know

The Boundless CFX is less expensive than its competitor. The CFX comes with a 3-year manufacturer’s warranty and 90 days on the battery. The Mighty comes with a 2-year manufacturer’s warranty. The latter has a liquid pad for use with concentrates and a flippable mouthpiece that you do not have to worry about breaking or cracking. The Boundless CFX has an extract pod for use with waxes and oils. Both units come packed with everything that you need (with the exception of dry material, oils or waxes, of course) to get started. The Mighty vaporizer includes a few spare screens, a spare seal and a filling aid in their box just in case.

Each of these vaporizers has its pros and cons, their similarities and differences. A choice between the two will really come down to what a consumer wants to spend, battery life, and the temperatures that the user wants to heat their product to.

The Boundless CFX is at a much lower price point than its competitor. It produces high quality, rich and flavourful vapour at the lower temperature settings but it degrades quicker at higher temperatures than its competition. It has a superior heat up time at 30 seconds only. The very large chamber is a plus for many users, especially those who want to use it more often without having to refill it or have longer sessions.

The digital display feature on the Boundless model contains just a little more information and is easier to read than the Storz & Bickel Mighty vaporizer. The CFX has only half of the battery life but it also has better charging options for most users. You won’t have the ability to operate the unit on AC only but you will have the ability to charge the battery in only 30 minutes, compared to 2 hours. Automatic standby mode, a slightly longer warranty and a 5-minute (300 second) session timer are also features that users might want to consider in making their purchase.

Its competitor has better quality vapour at higher temperatures, and has a much superior battery life along with the ability to use it even when the batteries are dead. It is also the sturdier built of the two models.

Neither model is particularly portable or discreet, though they can be carried in a larger purse or backpack without any difficulty.

This trusted information is sourced from the manufacturers (Boundless and our own experience with the Boundless CFX and Mitghy Vaporizer.