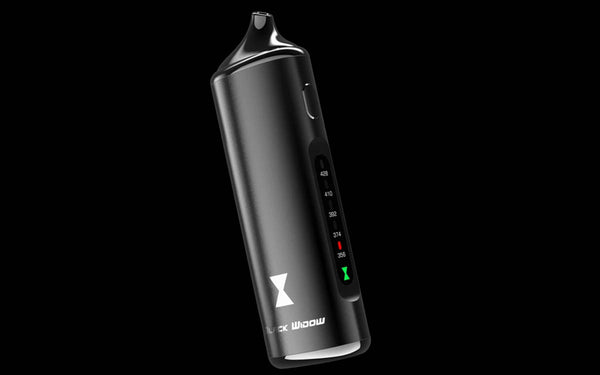 After shopping online for some time, we decided to test out The purse/wallet-friendly Black Widow. Currently, on the market, The Black Widow is a small, portable yet durable budget vaporizer capable of burning freshly ground dry herbs. Its low price allows it to be easily accessible to most buyers, and its low-weight silver steel alloy frame holds a row of buttons capable of changing various temperature settings.

Even just opening up the box, any individual would feel excited. By marveling at its case and sleek grey design (although it does come in other colours), and analysing its stainless steel mouthpiece, it has the appearance of a well-made device.

Although it is not perfect, it is a great product for its budget, and for everything that it offers (which is surprisingly a lot in one little package).

Due to its small size, the Black Widow vaporizer can be used in any situation. This is very useful for users who are on the go and rely on a vaporizer for their medication. Its size makes it possible for users to carry it in their pockets in public, and not worry too much about a bulge or about it falling out.

Wide enough to fit into most people’s pockets or bags, the vaporizer itself is similar to phone in size. While it will stick out as a vaporizer pen, overall it’s a very easy thing to transport.

Although it could be uncomfortable having it in the same pocket as your phone, overall both could possibly fit together comfortably. Its size and weight can also be a deterrent, making it easy to slip out of your hand if you are not careful. For reference, the device itself is probably about a third the size of an iPhone.

With a rubber seal on its base, it makes sure that no air or any other contaminant gets into the body itself, trapping the mouth-piece and keeping it clean. This ensures that the mouthpiece won't degrade over time, which is often the case with other vaporizers.

It comes with a magnetic stainless steel white mouthpiece, which is easily cleaned and detachable from its frame. Its ceramic heating chamber, which holds perhaps half a gram of dried herbs and rests just below the mouth-piece.

The Black Widow Vaporizer’s frame, made of aluminium alloy, holds five heat settings with preset temperatures so that heat control is easy. Simply by touching a button and holding it five times, users are able to turn on the device.

However, due to its overall design being made of steel, it can get relatively hot if left on for a long enough time. This makes its prolonged use quite dangerous and can make it uncomfortable to hold the longer time goes on.

With its cut-off battery setting, users are allowed the freedom to casually put away their device without worrying that they are wasting the battery. This is different from other devices on the market, which often wastes battery life with sensitive push-buttons that turn on the vaporizer accidentally.

Unlike other devices, the Black Widow comes equipped with a five-minute cut-off timer, meaning if an individual forgets to turn off their vaporizer, it automatically turns off. This feature coupled with its 2200mAh lithium-ion battery charged via Micro-USB. It has a substantially long battery as well as ease of access.

The convenience of being able to charge the product in a similar way to your phone is very helpful. However, not having a removable battery would eventually mean if this product breaks you would need to send it back.

After just 5 seconds, the Black Widow’s LED lights light up green to indicate that it is ready to vape. No matter which setting you are on, this device produces high vapour quality.

After using it for a few minutes, the mouth-piece itself becomes very hot, making its use hard without the silicone cover that comes included with the package. This could potentially make longer vaping sessions difficult.

The Black Widow Vaporizer’s various temperature settings are capable of producing large, flavourful clouds and high-quality vapour production which will make even the most seasoned smoker happy. At its highest setting, these clouds can often be harsh on less-experienced users, making the Black Widow vaporizer a good choice for those who just want to get into the practice.

The lowest temperature range, which although produces the smallest clouds, maybe more enjoyable for those who have not used vaporizers prior and promoted their buying of the product also.

With more seasoned smokers, however, you could be happiest with the mediate to highest settings (392 Fahrenheit to 420f), and find the lowest settings simply ineffective (356f).  Its ceramic convection oven gives it a smooth prominent taste and flavour, leaving a standing lingering taste that does not sit harshly in most smoker's throats, as do some other devices.

Also Read: HOW TO ADD SOME FLAVOUR TO YOUR VAPE EXPERIENCE The Black Widow Vaporizer’s low-price sets it aside from other dry-herb vaporizers on the market, especially in terms of higher-quality ones. While other vaporizers may be priced quite high, the Black Widow vaporizer, as well as each item included in its kit, is available for a very affordable price.

After using it for some time, it’s important to take a few moments to look over the other items that came in the box. In the kit, extra screens, as well as extra mouth-pieces, are included so users do not have to replace them as quickly. This is helpful for the repeated changing of the mouthpieces silicone cover. With those screens included, it also includes a concentrate insert and packing tool.

These screens allow users to use wax concentrates or wax oils with the pen, and the tool along with tweezers helps users load the device easy. The USB charger is compatible with Androids, making it easy if you ever lose the cord. It is quick and easy to charge in full within forty-five minutes.

Overall, the Black Widow Vaporizer came with two mouthpieces, screens, a cleaning brush, a set of tweezers, a loading tool, a USB charger, and most importantly an insert for other essential oils, adding significantly to the versatility of the device.

Lingering Impression Although the Black Widow Vaporizer isn’t perfect, it’s one device that offers a bang for your buck. The Black Widow’s small-size can led to anyone being able to take it anywhere, and use it on the go, (however this is definitely a product meant for stationary use).

The quickness and speed of its ceramic ovens make it a powerful budget vape-pen. Even with many other vaporizers offering more advanced customization features for their products, the presence of a cut-off timer in this product was very much welcomed - as many smokers often forget to turn off their devices.

This feature saves battery life, as well as prevents the device from getting too hot while in your pocket. Simply by placing the silicone cover onto it, and grinding up herb, it is ready for its first use.

Essential oil smokers will be glad to see that it includes an extract for concentrates. This opens up its expanded use in case you ever did want to get into essential oils. The pros of the Black Widow Vaporizer far outweigh its cons. This is an excellent choice for the vaping enthusiast, whether you’re brand new to vaping or a more experienced vaper. When the day comes that the device breaks, it will be a sad moment, but many won’t hesitate to buy another.

For those in the market for cheap vaporizers, then the Black Widow Vaporizer is a serious contender.

Also Read: WHICH ARE THE BEST VAPORIZERS FOR BEGINNERS?